For the last six years, Beoir's Beer of the Year competition has offered the clearest picture of the Irish beer connoisseur's drinking preference. That beers of such high calibre as Of Foam & Fury, Shandon Century Stout and The Full Irish have won it previously shows that we are, collectively, a discerning bunch. Uniquely, the competition has no entry process or fees, or limitations on which types of beer and from which kinds of breweries may enter: as long as it's Irish it's eligible and the only judge is the individual drinker's palate.

This year, for the first time, an additional award has been given to the best overall brewery: the one which scored the most points in total across all of the beers nominated. It exists to give particular recognition to those breweries committed to giving customers the quality and variety we seek. Fittingly, the award has been named in honour of the late Oliver Hughes who made an immeasurable contribution to the quality and variety of Irish beer.

2017 Beer of the Year
Surrender to the Voida double IPA by Whiplash Beer, of no fixed abode

Another year, another champion double IPA. The style, while not exactly ubiquitous in Irish brewing, has certainly become more commonplace. What separates Surrender to the Void from many of its contemporaries, however, is the clean, clear and distinct flavours without any syrupiness or heat. As well as the secret combination of hops, this beer's success owes much to to the care taken with canning and distribution, ensuring it's as fresh as possible when it lands in the glass.

Whiplash arrived on the scene in the first half of 2016, though the man behind it, Alex Lawes, was well-known in Irish beer previously, from his full-time job as Head Brewer at Rye River. Surrender to the Void was brewed at Rye River, though Alex has travelled to other breweries during the year to make different recipes, qualifying Whiplash as a fully-fledged gypsy brewer.

It's not all about pounding great IPAs for the Irish drinker: a need for beer by the pint is still part of the national character. And few beers are as rewarding to drink by the pint as Little Fawn, the 4.2% ABV session beer that White Hag introduced in the summer of 2015. It was a bit of a gamble for a brewery which specialised in stronger, heavier beers, especially since the style of session IPA had never been brewed here before. But it paid off handsomely, becoming the brewery's most popular beer by the time it was celebrating its second birthday in July 2016.

Mosaic is the signature hop, giving it a mouthwatering tropical fruit character backed by just enough of a bitter pinch to balance the flavour.

Pester-power is not to be underestimated. Bonita caused a sensation when it arrived in a very limited edition in early 2015. The reason for it being such a small batch was perhaps understandable: it's all of 7.1% ABV for one thing, and its amazing dark malt and floral hop complexity suggested that it was very expensive to make. And sure, maybe it was just a fluke. After a year of being asked when Bonita is coming back, the O Brother brothers finally gave in in autumn 2016 and brought it back, this time sending it out bottled as well as kegged, with a small amount on cask as well. And proving, of course, that they were well capable of repeating the feat of brewing a stand-out, unique, style-defying beer. Unsurprisingly, Beoir members deemed that deserving of an award, though presumably only to ensure a more regular supply.

Among the several hundred votes cast, for a total of 135 different beers from 39 different suppliers, a handful of breweries stood out as being the consistent favourites. When the final count was tallied, The White Hag scored highest, its total spread across eight of its beers. Though other breweries had more beers in the running, it's clear that White Hag's made a bigger impact on a per-beer basis, receiving plaudits for annual seasonals such as Yule, radical one-offs like their Brett Pale Ale, as well as permanent fixtures such as Little Fawn.

When White Hag arrived in a blaze of glory at the Irish Craft Beer Festival in 2014, Oliver Hughes was amazed that a new brewery in Sligo could be producing such a high-quality diverse output. It's fitting that the first recipient of the award bearing his name is that same brewery, still amazing the customers two and half years later.

Thanks as always to everyone who voted, and congratulations to all the winners. 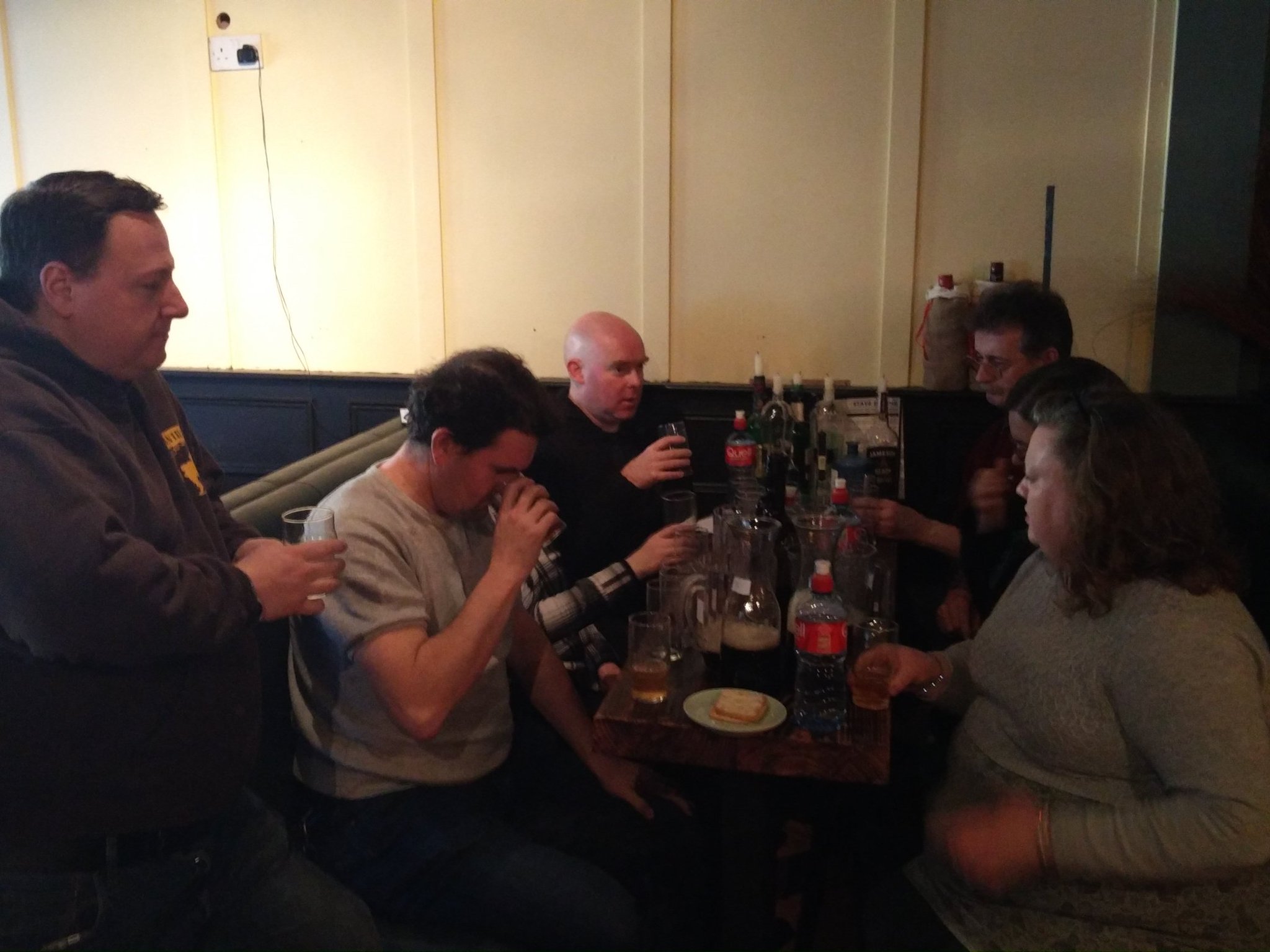 The 2017 Cask Ale & Experimental Brews festival over the weekend seemed like it had the largest number of cask beers available compared to previous years. In fact, there were only three kegged options on the main bar and about 23 casks on at any one time. There were further kegged Franciscan Well beers available inside at the regular bar.
We had about 40 beers to get through with 7 judges. Beoir Treasurer: John Stephens did most of the running around/beer collecting while Cider Officer & Regional Rep: Steve Lamond ran the competition. This was the second year of the Beoir Cask Competition. The beers judged were those available on the day of judging along with a number rescued in growlers before they ran out during the rest of the week. A number of beers were not judged on Saturday as they only went on after the competition came to a close.
Best in category 2017
Stout/ Porter: Brehon - Shanco Dubh Barrel-Aged Porter
Pale: Franciscan Well - Chieftain IPA
Red/ Amber/ Dungarvan - Mild
Specialty: YellowBelly - The Passion Lager
Best Overall 2017
3rd Dungarvan - Dark Mild
2nd Brehon - Shanco Dubh Barrel-Aged Porter
1st YellowBelly - The Passion Lager
For completeness, here are the winners from 2016
Best Lager - YellowBelly Rosehip Schwartz
Best "Pale" - West Cork Roaring Ruby
Best Stout - Black's World's End
Best Specialty - Otterbank Pine Needle Berlinner Weisse (since named "The Vikings are Coming")
3rd Otterbank - Pine Needle Berlinner Weisse (now branded YellowBelly "The Vikings are Coming")
2nd Black's - World's End
1st West Cork - Roaring Ruby
You will see a difference in the categories between 2016 and 2017. There were not enough lagers to form a category so we placed them in Specialty as they were specialty beers anyway. We had enough red/ambers to give them their own category this year.
Thanks to the Franciscan Well for hosting and to the judges and stewards who gave up their time on the day.

Beoir welcomes the news today that the Labour party are to introduce a Bill aimed at boosting craft-beer tourism in Ireland by removing the major regulatory barrier for breweries, microbreweries, cider makers and distilleries.

The Intoxicating Liquor (Breweries and Distilleries) Bill 2016 would allow these businesses to sell their own produce to tourists and other visitors on site. Currently, a brewery manufacturer’s licence only allows them to see in excess of about 19 litres which is too much for the average consumer.

Beoir has been campaigning for this measure for a number of years, most recently in our pre-budget submission. This will open up a new level of consumer choice and really help our tourism sector. Brewery and distillery tourism is on the rise all around the world and we see especially potential for tourism in the cider producer sector. This will be a great boost to rural Ireland which is where most cider producers are located.

We are happy to work with breweries, cider producers, and government if we can help in any way from a consumer standpoint.

English beer writer Pete Brown is probably better known for his matey-blokey beer history and travel books, like Hops & Glory (the definitive story of IPA) and Shakespeare's Local (a history of one not-so-well-known London pub). His latest is a rather different format, however. The Pub, subtitled "A Cultural Institution - from Country Inns to Craft Beer Bars and Corner Locals", is a glossy, lavishly illustrated, coffee-table job, highlighting 50 different pubs around the UK.

It's more than a work of pub pornography, however. The book also has a practical remit, documenting an additional 250 pubs to the ones featured, so despite a total lack of portability it also has a very useful reference function. If you're going to a specific part of the UK and looking for particularly pretty or otherwise noteworthy pubs to visit, this book is of real help. The pubs are set out region by region with a couple of exceptional examples given a double-page spread of photographs and Pete's personal account of the place. These highlights are interspersed with single-paragraph descriptions of other pubs in the region, all with details of facilities available, address and contact details.